Perhaps in the annals of time, the two most significant words were these. What was lost in Eden found light the moment He came. We often bypass the importance of that time when The Door was opened to the world. The decay of flesh; with its carnal applications, had cast a long shadow on the earth. Our modern view, cloaked with conveniences and superficial concepts, limits our comprehension of the destruction of sin. Humanity was in a downward spiral. A silent heaven combined with a listless sacrifice became the immeasurable distance from God to man.

And yet, He came.

John spares no feelings in the matter. Jesus came to His own, but His own received Him not. It was akin to a city in famine rejecting a bounty of food: A people in drought declining the free flowing waters from a mountain spring. His own did not receive Him. They looked past Him without appeal or inquiry. All they would ever need could be found in Him, but they denied Him entry into their lives and their loss rippled through the ages.

The redeeming verse, however, followed the heartbreak of their rejection. John 1:12 But as many as received him, to them gave he power to become the sons of God, even to them that believe on his name:

Our birth was not that of Abraham’s seed. We were not the descendants of the Covenant, but through the Name of Jesus and obedience we were born of God. Jesus called it being born again (John 3). All of it happened because He came.

The trappings of this season cannot tell the story. Christmas is paused, when God wrapped Himself in human form and became the Lamb slain to recover what was lost. The primary meaning of Christmas is not about gifts, food or family. Those things are just byproducts of our rejoicing. Christmas is the recognition of a God that loved us so much, He gave His only begotten son. He gave, when He came. 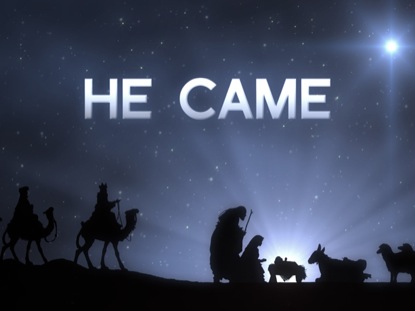 The season is upon us, but perhaps it’s not the season you were thinking of. The Bible often offers a polar look at the principles it presents. For instance, Paul wrote about a “due season” in which a time of reaping would occur. However, in the construct of the verse, he implies a season opposite of reaping. He wrote: Galatians 6:9 And let us not be weary in well doing: for in due season we shall reap, if we faint not.

There is a season of “well doing” which does not produce a crop. This God-inspired book presents the need to continue in times of want. It implores us to work, pray, give, fast, and serve even when there is no evidence of a harvest. The seasons of planting and waiting are always more critical than the season of reaping. The heart of the faithful is challenged when the right thing is done, but the result is not evident. Everyone desires their “due season.” Few want to discuss the one which precedes it.

Daniel prayed for three weeks without an answer. In his world, this was an uncommon occurrence. While the prayer was heard and the answer was on its way, Daniel had to rely upon the right that he had done and not the outcome. His reaction was to continue in faith regardless of the silence. To that end, the Answer belongs to the Lord. The Harvest is up to Him. He is the Giver of all Good things. James 1:17 Every good gift and every perfect gift is from above, and cometh down from the Father of lights, with whom is no variableness, neither shadow of turning.

Seasons change, but I wonder if they are contingent upon how I treat them. It could be that the goodness of God is keeping me in my season so I can learn to rejoice in it. Trust is rarely founded in the harvest and growth is not always an upward movement. The process of Growth entails pruning or cutting back. Paul and Silas were singing at midnight, bound in a Roman jail. It may have looked like the end, but they were showing us what it means to faint not in Well Doing. The season must not limit our faith or our work. If we continue, a new season will come.

Perhaps one of the modern traits that separate the 21st Century church from the early church is the proliferation of what we know as a “minimized sacrifice”. The early believers understood blood sacrifice, but made the transition to personal sacrifice. Paul taught them to offer themselves as “a living sacrifice.” Many of them witnessed Jesus Christ as He hung on the Cross. These first believers lived a life congruent with that image. Theirs was not a momentary event.

When I speak of sacrifice, some think of worship on Sundays. A few equate it with returning their tithes and offerings. I’ve even heard people define their sacrifice as their apparel. None of these are sacrifice. These are requirements. When essentials are conflated with sacrifice, the latter is left undone, i.e., there is nothing given or offered. Jesus gave what He was not required to give. He did not have to die for our sins, but He willingly drank the cup of gall. 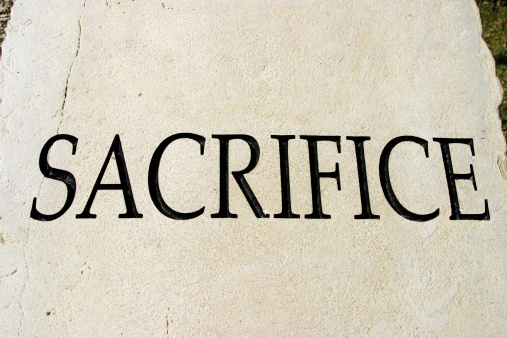 The key word in the Bible is hidden to the eye, but revealed in understanding: Nevertheless. If we break it up in three words, we can take our first step toward sacrifice. Never The Less. Always more. Always something that makes a demand on our lives.

The result of sacrifice is a myriad of things. While I cannot detail them all, it is apparent through the scripture that personal sacrifice is our connection to the Lord. David offered a sacrifice that cost him something – 2 Samuel 24:24 I will not “…offer burnt offerings unto the LORD my God of that which doth cost me nothing.

Sacrifice is bringing our best to God. It is giving what cannot be replaced or something that we cannot put in our budget; such as, time, energy, money, materials, talents, or things we cherish. Abraham brought his dream, Isaac, and laid him on the altar. Mount Moriah was witness to the measure of Abraham’s resolve to value God more than his son!

I am compelled to lead you into this realm, though I know it is an affront to our natural minds. The Holy Spirit is calling for a people who are willing to live a life of daily sacrifice. It is our connection with those who first began.