Truth be told, the prophet Jeremiah cried more than he preached for the majority of his ministry. The people of Israel had abandoned their faith in God which activated the prophet’s burden. Israel had devolved into a backslidden nation and Jeremiah became the weeping prophet. He preached and prayed for 40 years without a single convert. The pleasures of life had consumed the people, along with the trappings of carnal living – too much to relate in this small communique.

The problem was the heart of the people. Israel had a heart problem. Even still, the Lord’s intent was this: Jeremiah 24:7 I will give them a heart to know me, that I am the LORD. They will be my people, and I will be their God, for they will return to me with all their heart. God followed it up with these words: Jeremiah 29:13 You will seek me and find me when you seek me with all your heart.

Are you getting this? The people had heart issues. They were consumed with things that led them away from God. The fact is that no one can serve two masters. Divided hearts always end in tragedy and God is the first to opt out. He is a jealous God and will not share your heart with other things beside Him. 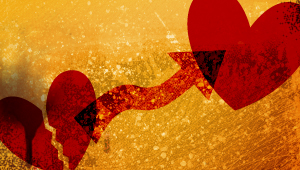 Our hearts are like limited reservoirs: They can only hold so much emotion and love. We are not able to love the things of the world and still have passion for the things of the Lord. When we are consumed with the things of the world, God has no place to dwell. It takes a “Heart Transplant” for us to connect with His Kingdom. If not, our lives become cold and indifferent. Even the most basic things can lead us away from the feet of Jesus.

Ask Martha and Mary. One is busy about the task while the other has chosen the one needful thing. Ask Amaziah, who at 25 years old became the king, but was defined this way: 2 Chronicles 25:2 And he did that which was right in the sight of the LORD, but not with a perfect heart.

I urge you today to give God your entire heart. Don’t be consumed by the things of the world. They fade so fast. They never satisfy the never dying soul. Learn to serve, to give, and to worship. Give God the best of your days, and in return, He will give you a heart to know Him. The promise of total commitment is the most profound words you will ever hear. In the end, He will give you life everlasting.

Genesis 8:22 “While the earth remaineth, seedtime and harvest, and cold and heat, and summer and winter, and day and night shall not cease.”

As long as the earth exists there will always be seasons. Seasons are ordained by God. They are without rebuttal. Daniel said that God alone changes the times and seasons. He removes kings and sets up new ones. God has the sole authority over all times. At His Will, He can change their length or breadth. He casts them into form.

Harvest is a wonderful time. However, a season denotes an expiration date. Contrary to some, every season is not Harvest. Even the best soil needs rest. Spring is refreshing, and yet, it is only known by the preceding season of winter. Solomon wrote there is a time for everything; not
“Everything All of the time.”

There will always be seasons in our lives. Regardless of how much seed is planted or how great the harvest, there is coming a time when there is nothing. There are moments of gain and of loss. Those who boast of understanding all things are not telling the truth. There are moments of bewilderment. Jesus did not answer every question. I cannot tell you the complexities I have faced without an answer. I simply did not know. I stood still and waited on God. In His time (which was not my time) He gave the Word. Some situations, however, still trouble me.

Through patience we are stronger and through recognition we are more determined. The night is not always pleasant, but it is vital. There is no light without darkness; no joy without pain; no crown without a cross.

God is in charge of the Seasons. We cannot manipulate our path away from His times. Programs will not keep us from the struggle. Shame on anyone who boasts of such things. We strive for the mastery. We lean on the Lord and accept His times in order to know Him.

Job did not put himself into suffering. God did that. And yet, God brought him out and doubled his blessing. Joseph did not sell himself to those traveling merchants. God allowed that. And in time, God elevated Joseph to the saving of his family. Moses did not pin the people in between the Red Sea and the Egyptian army. God ordered it so He could part the waters.

Seasons have made me more fervent in summer and more patient in winter. His “change” made me work harder in the opportunity and trust deeper when the sky was empty. This is how I proclaim Him to be the Lord of all. 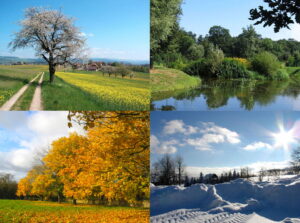 Galatians 5:7-9 “Ye did run well; who did hinder you that ye should not obey the truth? This persuasion cometh not of him that calleth you. A little leaven leaveneth the whole lump.”

Notice the words in the text. Things were going so well for those believers in Galatia. However, someone added something detrimental to their “run” and it hindered their relationship with God. Paul emphatically denounced the change. Paul’s persuasion was that of perseverance and faithfulness. Regardless of life’s circumstances, Paul believed that nothing and no one should be allowed to hinder the path of the believer. And then Paul speaks of leaven. It doesn’t take much, he said, to affect the whole.

Notwithstanding, these words were written 2,000 years ago, they are more current and applicable than ever. The Bible is a living organism. It breathes. It lives, and in this respect it is both a settled truth and a living document. The Bible is God’s Word for our lives in the present and Paul is preaching a message that demands to be heard. His is a question of  calling out people who hinder people. He did not say, “what” hindered you. He said, “who” hindered you. Who was it that caused you to turn away from the truth that was given? Who spoke into your life that tripped you up and caused you to lose faith and then doubt the very tenets of the Faith?

Not a few have been tainted by a “little leaven.” Many have fallen away, because they allowed a negative voice to enter their world. It happens over dinner or lunch. It happens among friends, on the phone and on social media. Questions are asked and doors are open that hinder faith and faithfulness. We may be equipped in fighting spiritual oppression, but many are failing to guard their ears from “a little leaven.”

Contrary to popular belief, the enemy of our soul does not need a large opening to cause confusion and doubt. He just needs someone with an issue to offer a small hindrance. And to this end, the enemy uses people, even other believers, to hinder our lives. So instead of moving forward; running the race with perseverance, the first persuasion is dismantled and the race is lost.

The Holy Spirit is speaking to us through His forever settled Word: Stand fast. Don’t be shaken. Be unmovable; rooted and grounded in the Word, the Faith, and the church. Don’t think that little things won’t cause damage. Be sober. Be awake and on guard. Love everyone, but invest yourself in whatever and whoever is honest, right, pure, and of good report.