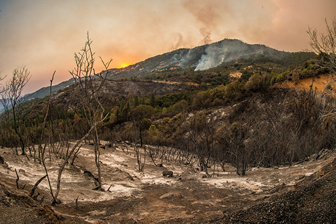 Climate change, I cannot think a more divisive debate in our world today. While the subject weighs on world economies, political positions seem to be impacted the most. In brief, the theory is that human activity causes an increase in carbon emissions, thus creating an increase in the earth’s atmospheric temperatures through a series of ozone failures. In layman’s terms, humanity’s proceedings is causing the earth to warm. California’s smog has been used as an example. When the winds are silent, carbon dioxide and other pollutions hover in the noonday sky. Beijing, China is dealing with the same issue. Too many people in a small space has caused an increase in air quality. So while the overall global, man-made change in weather has been debated, there is no doubt that people have a bearing on the environment around them.

The truth is people always affect the climate, but the climate I’m talking about is not physical. I’m promoting a spiritual change. Our activity in praise and worship creates an atmosphere where the Lord operates. In fact, He inhabits the praises of His people. Liberty is the result of the Lord’s presence. Our endeavors through worship, and singing can change the atmosphere. Paul and Silas proved the point when they were thrown into an inner prison. The Scripture tells us that they were bound hand and foot. They were trapped in stocks and bonds. However, the Bible also declares that Acts 16:25 “…at midnight Paul and Silas prayed, and sang praises unto God: and the prisoners heard them. It was a change in the climate. Songs of praise changed the atmosphere. An inner prison cell was no match for the songs of Zion. Imprisonment had to give way to praise at midnight. Their activity; their human expression altered the place where they were bound. No one told them to sing and there is no indication that they knew what would happen if they did. It appears that Paul and Silas were less concerned with the outcome and more focused on changing the atmosphere around them. The climate changed and the other prisoners heard them.

Praise at midnight is so powerful that it changes the climate of everyone. People who praise in the middle of their dilemma cause a disruption in the dispositions of the bound, weary, and afflicted. The next verse is a display of how the human effort effects the spiritual realm. Suddenly, there was an earthquake and it shook the foundations of the prison and everyone was set free. I’m ready for a climate change!