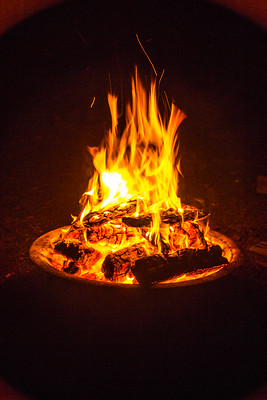 Having gathered the wood himself, Elijah rebuilt the broken down altar left by the false prophets of Baal and of the grove. Mount Carmel had never seen so many people as the moment became an event. The prophet had come with a challenge that the God who answers by fire, “let Him be God.” But first, the altar. First, the sacrifice. God’s “Fire” has always been present. He has been and shall always be. God is from before time and He shall reign when time is no more. The altar is my part. The sacrifice is me. God’s fire has been waiting on someone to offer themselves upon the altar built by their own hands. This means work. Altars demand focus and attention. They take time to construct and energy to maintain. In brief, altars are demanding.

Elijah saw fire fall as it consumed the sacrifice, the water, and the dust. He rejoiced to hear the sound of abundance of rain. He killed 850 false prophets and gave commands to the people and the king. The scripture indicates that he outran Ahab’s chariot down a nine mile stretch. All of it, however, came after the altar. It did not take much searching to find studies on time spent on media devices. The number of hours of cellphone use and surfing is staggering. Surely our age is entrenched with entertainment and communication. The problem is that there is no time left for personal altars. In fact, it’s doubtful that altars are found in individual homes. Most people think of an altar as a fixed location in their local assembly. They think that church is for God and homes are for everything else. We want the “fire” to fall. In times of famine, we seek for rain. Prayers are prayed for God to display His power among His people and the unbeliever. But first, comes the Altar. First comes the building of the place of sacrifice.

You see, when the altar is not present, no one thinks about the sacrifice. We tend to just pray for the miracle. Prayers without sacrifice are often words of convenience. When the altar is absent, there is no need to give up time, money, ambition, or entertainment. Altars are intrusive and taxing. They remind us that we are to present our own bodies as a living sacrifice. They feature the remnants of self-imposed loss and total reliance upon God. We want the miracle and we need it. However, the miracle may very well rest on the presence of the Altar.