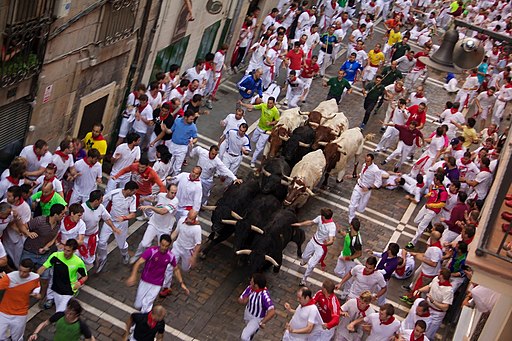 In case you missed it, Puerto de San Lorenzo’s fighting bulls were running through the cobblestone streets of Pamplona, Spain last week. Multiple bulls with an average weight of 1300+ pounds were racing around bends and curves while revelers ran ahead and beside. On the second day of the running, several people were injured. Medics were on site to care for those left bleeding and wounded. The years of running with the bulls have left many gored; some suffered head injuries, broken bones and other issues not soon repaired.

Regardless of the warnings, thousands gather to feel the rush of adrenaline as they dodge the pointed horns of these monstrous beasts. Everyone who hops the barricade to enter this chaotic scene knows the danger they are facing. It’s not a mystery that a 180 pound man is no match for a massive bull running full speed.

The question is “why”? Tradition comes to mind. Thrill seekers could answer the question, I suppose. Why would people intentionally put themselves in the path of a running bull? Why take the chance of being impaled by the horns of an angry animal? The bull has no feelings. He has no sympathy for the fools who stand in his way. Regardless of how many are injured this year; regardless of the bloodstained streets and forever-injuries, next year will be no different.

Solomon wrote of a man who stood in the street and said that a lion was there to devour him. He knew the danger, but did nothing to change his location. He just stood there, waiting to die. Paul said that the “wages of sin is death.” There is no mystery that sin devours the soul. Sin separates us from God and creates lasting pain. Nevertheless, we hear little of it because no one wants to feel bad about their poor behavior. The 21st Century Christian has modernized the definition of sin in order to cope with guilt.

Still yet, I rise to say, “Walk in the Light as He is in the Light.” Romans 8:1 There is therefore now no condemnation to them which are in Christ Jesus, who walk not after the flesh, but after the Spirit. You’ll never survive running in the way of danger. Jesus is calling for a separated Church. I pray we can hear the voice of the Spirit. Romans 8:6 For to be carnally minded is death; but to be spiritually minded is life and peace.