Flora of Israel describes the many species of the acacia. The horn of Africa might boast a host of acacia types. In all, the genus Acacia entails about 160 species of trees and shrubs in the pea family (Fabaceae). Israel’s types range in size with almost all featuring stipular thorns protruding from the thin and flexible branches. These types of trees/bushes do not need much care as they can survive in dry and arid places. While most of these thorny trees have been pulled or covered up by concrete and the mass of seasonal tourists, Jerusalem once had them in abundance.

It would have been most common for Roman soldiers to play psychological games with those condemned to die. Humiliation and torment accompanied the physical suffering. When it came to executions, the Romans left nothing out. Jesus felt the full impact of those trained tormentors: John 19:2 “And the soldiers platted a crown of thorns, and put it on his head, and they put on him a purple robe.”

Calvary entailed the suffering of The Lamb of God in ways we can barely grasp. He was indeed led as a lamb to the slaughter. He died to take away the sins of the world, as John the Baptist so aptly said. Jesus, Who knew no sin, became sin for our sake and through His death we have forgiveness! Through His resurrection we have hope and life.

If Jesus had died and was buried, we would all be set free from sin, but there would be no further expectation. Yet the Resurrection gave us something beyond this life. It gave us a destiny with the Lord that reached beyond the grave. His resurrection brought Joy and Rejoicing!

Had Jesus only worn the Crown of Thorns, then my sins would have been paid for, but my future would be unknown, perhaps in jeopardy. However, Jesus Christ wore the thorns so that He could trade them in for a Crown of Gold.

We do not worship a crucified savior only: We worship a Resurrected King. John saw Jesus Christ and described Him in the final days of time: Revelation 14:14 “And I looked, and behold a white cloud, and upon the cloud one sat like unto the Son of man, having on his head a golden crown, and in his hand a sharp sickle.” 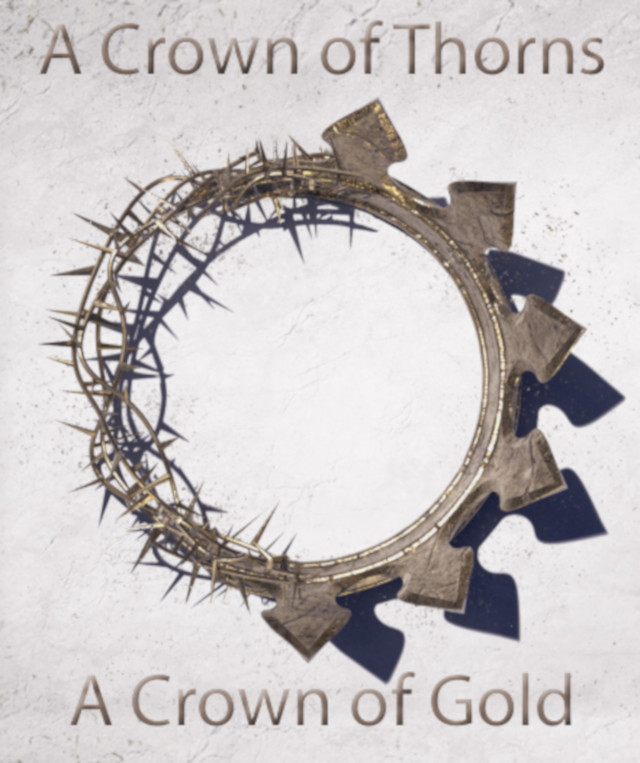