Who would have thought that a loss would be the catalyst for a victory? That is what happened in a place called Breed’s Hill, more commonly known as the Battle of Bunker Hill. The colonists lost, but it propelled them to a greater triumph. Their momentary defeat gave them confidence to win the war.

The colonists fell in defeat, but they proved that the British were not invincible. The British general, Howell, saw the passion of the colonists and he said that they had done more work in one night than his whole army had done in a month. The colonist had built a 6ft high dirt wall and used it to protect their knoll. 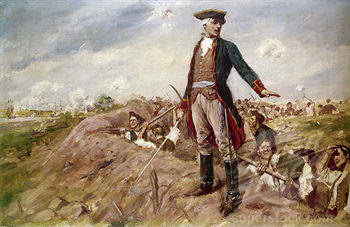 The British fired cannons at the wall from their ships and then marched up the hill only to be slain by the masses. The colonists were told, “Don’t fire until you see the whites of their eyes.”

In the end, the colonists lost, but they killed 226 British soldiers and wounded 828. It was a defeat that gave them confidence that they could defeat the enemy.

Confidence is a curious thing. Its fibers are not always made up of trophies and finish lines. Immediate success is not always the firm ground where life is built.

In fact, trouble is often the ingredient that produces patience, long-suffering, kindness, and the attributes of Jesus Christ. Even defeat, as devastating at it might be, teaches far more than our cumulative successes. A mistake provokes an apology – humility is borne out of repentance. A misstep helps us to reevaluate our journey.

The early church was grounded by tribulation and it became the birthing place of prayer. The Gospel’s cost drove them to recognize its value.

There is a Bunker Hill in the lives of men and women. It’s the place where your temporary defeat becomes the foundation of your confidence in God. It’s the proving ground where your faith leads you toward greater victory. Rejoice not against me O my enemy for when I fall I shall arise… Micah 7:8