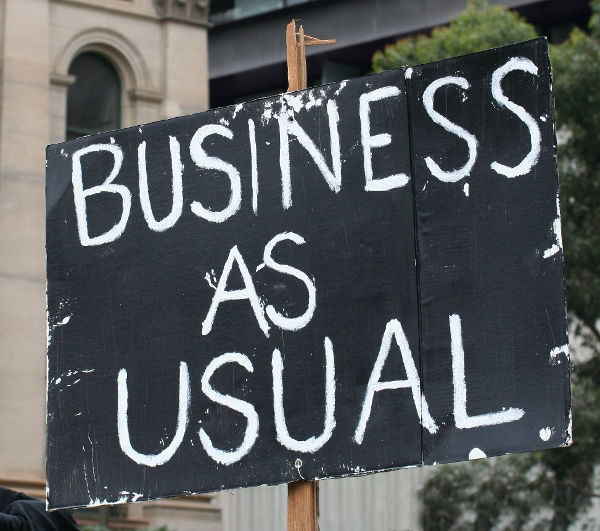 The economy seems to be doing well these days. In the world of real estate they say it is a seller’s market. Precious metals are holding steady. People are building, buying, partying, playing, and the list goes on. Regarding religions and worldliness, there are both perversions and purities depending on which side you live. I suppose that it’s Business As Usual.

Business as usual is the interpretation that most give to the words of Jesus found in Luke 17:28, “Likewise also as it was in the days of Lot; they did eat, they drank, they bought, they sold, they planted, they builded.”

People were going about the daily duties of life. They were living from paycheck to paycheck; vacation to vacation; putting in time and enjoying the accumulation of things. Sin, of course, was the order of the day as they followed the whims of their carnal nature. It was all typical until the day that Lot left Sodom. Jesus made a comparison in verse 30: “the world will be going about their lives. It will be business as usual right up until the day, the moment, when the Messiah returns.”

Jesus said that right before His coming there will be an unawareness. Few will be watching for His return. Many will be engrossed in their daily grind and chores; filled up with personal ambitions and goals. Politics and entertainment will fill every empty moment of the day. Making money and paying bills will dominate the thoughts of people. Getting over the next hurdle; a birthday party; a deadline to make; an interview to prepare for… life will consume the mind of believers and sinners alike.

It will all be the same as the day before UNTIL the Trumpet sounds and Jesus is revealed. Then everything will stop. The change that is coming will be so profound that nothing else will matter. The entire world will shift in a single second of time. It will be so extreme and overwhelming that no one will be able to explain it or dismiss it. All that is typical will be transformed into abnormal. The Righteous will be gone and their preserving power will be removed. Like a rotting meat, society will instantly begin to decay. The Church is the Salt of the Earth and when that preserving salt is taken away, the world will abruptly devolve into chaos and confusion.

I write to say: Be sober, be vigilant. Don’t allow the cares of this world or Business As Usual cloud the soon coming of the Lord. Flee the lusts of the flesh. Find friends that love truth and reject anyone who leads you away from commitment and consecration. Stay faithful to the House of the Lord. Finally, give away what you cannot keep to gain what you cannot lose.