In response to a recent terrorist act, a person close by said, “Well, life goes on.” I wouldn’t consider their statement part of the normalcy bias theory, but more of the new disposition that our country has accepted. Many consider this part of the “New normal.” This thought says that what was once abnormal has become common and because of its prevalence and frequency, it then becomes the norm. “New normals” mean definitions of terms, lifestyles, ideas, terrorism, social behaviors, apparel, and education are changed to reflect the preferences of the current culture. In essence, mass consciousness is now dictating what we should think, say, and how we behave. We see this happening in real time as careers are altered and people are hired or fired based upon their acceptance of the new norms. 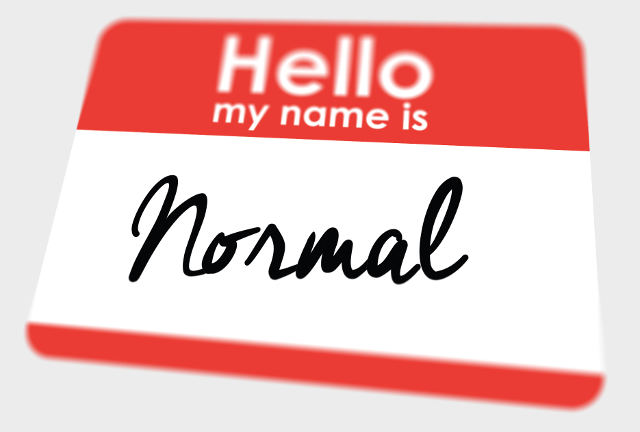 Nevertheless, there is a problem. New norms do not reflect God’s law. New norms do not follow the path of holiness or righteousness. There’s a problem with allowing the “mass” to decide what is right and what is wrong when the scripture has already declared it so. For instance, the rainbow was given as a sign of God’s covenant with mankind that He would not flood the entire earth again. However, a perverse group has stolen the rainbow and used it as a sign to reflect tolerance of homosexual lifestyles. Christmas songs once used the word gay (happy), e.g., “don we now our gay apparel,” but today the new norm uses it to declare a sexual preference.

Normalizing sin is at the root of these concepts. The worldly mind thinks that as long as ideas are common, prevalent, and frequent then those ideas are not sinful. The prophet Isaiah foretold of this hour: Isaiah 5:20 “Woe unto them that call evil good, and good evil; that put darkness for light, and light for darkness; that put bitter for sweet, and sweet for bitter!”

Consider apparel that appeals to the sensual desires of the flesh. Recently a research group detailed the list of so-called “soft-porn” television programs. Can you believe it? (insert sarcasm) Dancing With the Stars, DWS, is not about dancing. It’s a showcase of sexuality. Reality shows of all kinds have exploited and normalized the debauchery of the flesh.

I’m just one voice, but I rise to say The Church must be The Church. The people of God must stand for Biblical Truth and not for the validation of a corrupt world. The new norms are a certain path to destruction. I’m just preaching a little of Paul’s sermon… …2 Corinthians 6:17 “Wherefore come out from among them, and be ye separate, saith the Lord, and touch not the unclean thing; and I will receive you.” He’s coming back for a bride without spot or wrinkle or any such thing!

1 Thessalonians 5:18 In every thing give thanks: for this is the will of God in Christ Jesus concerning you.

1 Thessalonians 5 looks like a bullet list of instruction to the church. Quench not the Spirit. Rejoice evermore. Pray without ceasing. Receive prophesies and more. Then comes the above instruction in verse 18. I’ve often been asked about the “Will of God” and what it means to the individual. Often people want the Will of God to be subjective and relevant. We like specifics in order to unmask the murky generalities of loving the Lord and loving people. The scripture speaks in clear terms and here it is: 1 Thessalonians 5:18 In every thing give thanks: for this is the will of God in Christ Jesus concerning you.

According to the scripture, there are no conditions where we are absolved from giving thanks. There is no sickness, crisis, valley, or trial that can remove us from obligation of giving thanks. I understand the season of Thanksgiving. I’m concerned that if we don’t understand the Will of God for our lives, we will become nothing more than just seasonal saints. “We are not of this world; we are of God,” so writes the Apostle John. This means that January through December we are giving thanks. It means that we are neither conditioned nor directed by the calendar of our secular society.

Enter Job. News of his loss has culminated with the death of his children. Every material possession has been stolen or burned. It’s all gone. Job arises and in sorrow he tears his clothes and falls to the ground. Reality is a daunting scene. The cumulative tragedies could not be covered, but the next line says this: “he worshiped and said, Naked came I out of my mother’s womb, and naked shall I return thither: the LORD gave, and the LORD hath taken away; blessed be the name of the LORD. Job 1:21-22 In all this Job sinned not, nor charged God foolishly.

Giving thanks and blessing the Lord is easy when things are going well. Saying ‘Thank You’ is a pleasantry shared at the event of gain, but try to be thankful when you are shrouded in pain and confusion. It will take effort. When life is not so agreeable, the task will demand a mental focus and a disciplined heart. Paul said, “In everything give thanks.” This is the Will of God for our lives. In everything, we should give thanks, which includes every high and low. Everything is the totality of life, not just the intersection of blessing. When it’s not so easy to give thanks, remember that sometimes praise and thanks is a sacrifice.

Hebrew 13:15 By him therefore let us offer the sacrifice of praise to God continually, that is, the fruit of our lips giving thanks to his name.

Hebrews 11:7 By faith Noah, being warned of God of things not seen as yet, moved with fear, prepared an ark to the saving of his house; by the which he condemned the world, and became heir of the righteousness which is by faith.

It must have been a lonely scene when Noah took to the stage to preach his message of world destruction. If he were alive today, we would call him a fanatic. I’m certain that Twitter would have a field day mocking a madman building a boat in his backyard. To that was the fact that it had never rained before. No one even knew what Noah was talking about. The skies opening up was both an unknown and ridiculous proposition, but there stands Noah on his heap of discarded gopher wood scraps preaching the end of the world and calling them to repent and find a place in the ark. He has no followers besides his own family, which doesn’t make for a very attractive group. He’s telling them to prepare… …and by the way, you’ll have to share space with the animals. It’ll be mostly dark and filled with an oder of the worst kind, but you’ll be saved.

Noah builds the ark and then fills the open crevices with tar inside and out. He secures the boat as best he can seeing there is no reference to the longevity of his stay. All he knows is that God said build an ark and get inside. He’s moved with fear of all things. The entire idea is so foreign to our modern Christianity with all of it’s feel-good sermons and prosperity doctrines.

Crazy Noah! All that preaching about things that have never happened. He’s redundant. Peter said that he preached for 120 years while the ark was being prepared. That’s a long time not to have some other thought. You’d think Noah would get some new material. Why should we bring our families back, if we hear the same thing we heard last week? We need some innovation around here. How about current events or life applications? Don’t you think those subjects would benefit us more than the same old, worn out “God is coming soon” message?

I hope you are getting this: It’s foolish until it starts raining. Paul wrote: 1 Corinthians 1:21 For after that in the wisdom of God the world by wisdom knew not God, it pleased God by the foolishness of preaching to save them that believe. The message of New Birth might sound nonsensical until the Trumpet sounds and the dead in Christ rise first. Being devoted to the church, worshiping, giving, sacrificing, prayer meetings, and obedience all sounds constricting until that Great and Terrible Day of the Lord come. As Noah believed in something not yet seen, so too we are moved to prepare our lives and families for the coming of the Lord.

Acts 26:28 Then Agrippa said unto Paul, Almost thou persuadest me to be a Christian.

I’m peering over the edge at the end of Paul’s extensive life and ministry. The years of preaching and debating have afforded him the unique skill of persuasion shared by few. Hundreds of miracles, baptisms, and in-fillings have attended his journeys. Perhaps a thousand sermons have been delivered by his authoritative voice. He’s converted most of the known parts of Asia and established churches throughout the entire region. Now, Paul stands before King Agrippa to make a case for Jesus. My assumption is that a greater apostolic apologetic has never lived. Paul is profound, and Agrippa knows it. Paul can even see the belief in the eyes of the king when he says, “I know that thou believest.”

But in that moment of decision there is a line between life and death; between believing and denying. The line might be negligible, but it exists and it has separated many from the other side. Agrippa has consumed the world’s greatest preacher, and yet, he stumbles at the end. He’s standing at the threshold, but he hesitates to enter through the door of obedience.

Week after week I feel the Holy Spirit prodding me to persuade you of the Gospel, the Truth, the Way, and the doctrine. I’m making a case for Christ, though He needs nothing. Nevertheless, I present Jesus Christ and Him crucified. Sometimes I can see hesitations where the line between doubt and faith presses hard against minds and hearts. Hopefully, the hearer is working out their salvation with fear and trembling. Earnestly, I pray that the Word is received and we are all moving and abounding in the work of the Lord.

Even still, I’ve come to persuade. To stir up your mind’s remembrance to the miracles that you have seen. Remember the testimonies of deliverance found in the lives of so many. Know that the Blood of Jesus is powerful, and with His stripes we are healed. Be sober; be diligent. Look at the trajectory of our culture; how the whole world is morally bankrupt; how they are lost without the Cross. Know that the Word is forever settled and that the Lord has never failed. Speak His name at every juncture: Jesus! Remember the devils tremble and the earth rejoices over His name. He restores and makes all things new. Finally, there is no life greater than living for the Lord. I know you believe it.