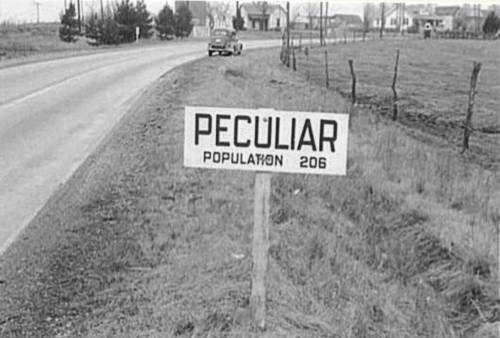 1 Peter 2:9 But you are a chosen people, a royal priesthood, a holy nation, a people belonging to God, that you may declare the praises of him who called you out of darkness into his wonderful light.

I’ve never been opposed to the people of God being called “peculiar.” We are different from the world and we are not ashamed. We are “set apart” and “called out” from the nations. So if you would like to refer to Peter’s writing in this way, then there are ample scriptures to assist you. However, the word “peculiar” actually refers to something belonging to someone, as someone’s property. It’s referring to ownership. It is “peculiar” in ownership. Yet, there is a double meaning in that this ownership (God) makes demands on His subjects to be different than the rest. Thus, peculiar retains its meaning in the light of the wishes of the owner.

New versions of the Bible have removed the word “peculiar.” Mostly because the English language has suffered the fate of a vacuous crowd. They are missing the broader point that we are not of this world because God has chosen us. To that end, yes, we are strange, much like Moses when he named his son Gershom, “I am a stranger in a strange land.”

Think of it: Our country now normalizes perversions. What was once called evil is now applauded. Men becoming women is called courage, while the name of Jesus is offensive. Outward holiness is mocked by even so-called Bible believers. Surely we are peculiar. To be a virgin before marriage is an anomaly. To be faithful to your spouse is called rejecting your “natural instincts.” The nuclear family itself has been redefined because of its insolence. Can you imagine! Isaiah said, Isaiah 5:20 Woe unto them that call evil good, and good evil; that put darkness for light, and light for darkness; that put bitter for sweet, and sweet for bitter!

My word is this: We belong to Him. We are the called out ones. Chosen by God. He purchased us with His own Blood. He retains possession and that makes us peculiar. 1 John 4:6 “We are of God” we are not of this world. Therefore, we cannot look, act, or conduct ourselves by the standards of this world. I’m following after holiness without which no man shall see the Lord!