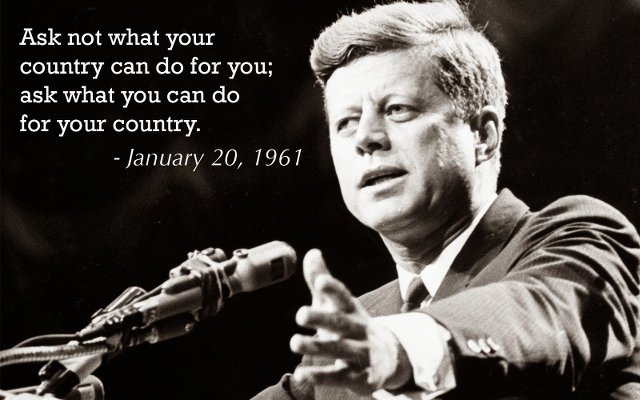 JFK’s best quote has been debated for a few decades. I tend to lean toward this one: “Ask not what your country can do for you. Ask what you can do for your country.” While Kennedy probably took the quote from a private school professor where he attended, the truth behind the words are profound. The statement is a selfless directive. It rebuts the consumer mentality which has afflicted our age. Jesus lived the life that embodied the idea of selflessness. The disciples’ deaths, found in Fox’s Book of Martyrs, describe the same. They were not self-seeking or egocentric. They were constantly thinking about the Body, the Church, and the Kingdom. The early church itself had this mentality. They were men and women who did not come to consume or take, but rather came to give. They gave of themselves in every way and mostly in time and in prayer.

Our nation was founded on the same concept. The cost of our freedom was laid on the backs of people who made the ultimate sacrifice. Most of their names lay hidden beneath the plethora of conveniences which we now enjoy. Even today, as we come together to worship, we are standing in a place of liberty, borne out by spiritual men and women. The church exists because of the labor of love wrought by the hands of families and ministries concealed by time and distance.

My great desire is to offer God something that comes at a cost. I hope that you might find the satisfaction in the same. As odd as it might sound to the carnal mind, the more I give of my life to the things of the church, the more thankful I am to be a part of the church. The investment of prayers and fastings, the time and energy given away has only embedded my desire for the things of God. This is our mantra, that the commission of Jesus Christ guides our ambitions. This is our heritage that people died to provide us this great Gospel. This is our desire to be wholly centered on the Lord and let the world go its way.

Num 11:29 And Moses said unto him, Enviest thou for my sake? would God that all the LORD’S people were prophets, and that the LORD would put his spirit upon them!

It was a moment of correction when Moses spoke the above text to a young and perhaps naive Joshua. God was about to anoint 70 leaders with the spirit of Moses, but two of the men were not present. In short, Joshua thought that the two men should not qualify because they had not made it into the Tabernacle, but instead, were outside among the people in the camp. Moses spoke a word that transcended time when he wished that the entire congregation would become prophets and spiritual leaders, not just the 70 men.

By the time John the Baptist entered the scene, a clear separation had occurred. It was etched in their mind that only a few would be “prophets” or spiritual leaders while the rest would become common. Interestingly enough, the term “laity” actually means “common.” By the 15th century most of the church world bought into the false notion that clergy and laity were separated by God. The idea of “laity” comes from the Greek “laos” meaning distinct from any priestly class. Later, the French word “laite,” taken from the Latin “laicus” solidified this idea that there should be no cross over. You were either a minister or you were common.

Moses prayed for the whole congregation to be prophets. Moses wanted the entire nation to seek after God, but they had grown accustom to a high priest and a veil. This separation removed them from their need to minister. It was not until the death of Jesus Christ that the veil was torn and the line was removed. Jesus became our Mediator and High Priest. The apostle made it clear when he wrote Heb 4:16 Let us therefore come boldly unto the throne of grace, that we may obtain mercy, and find grace to help in time of need. The early church believed this truth and it caused all of them to embrace spiritual endeavors and the preaching/teaching of the Gospel. Everyone became a disciple. Everyone taught the New Birth Experience spelled out in Acts 2:38. The heartbeat of Moses had come to fruition and today we must heed those same words to become preachers and teachers. There is no room for “common”. We are all responsible to share the Truth and the name of Jesus! I say, “Would God that all the Lord’s people preached the Gospel!”

John 14:27  Peace I leave with you, my peace I give unto you: not as the world giveth, give I unto you. Let not your heart be troubled, neither let it be afraid.

Moses stood before Pharaoh and threw down his rod.  The scripture tell us that it miraculously became a serpent.  Not to be outdone, Pharaoh’s magicians used a trick of the hand to do the same; only Moses’ serpent devoured theirs.  Moses turned water into blood, which provoked the magicians to duplicate the same. Time and again the forces of darkness attempted to mirror the things of God.  Darkness always attempts to counter the Light.  Paul and Silas experienced this when they encountered a girl with the spirit of divination.  The evil spirit desired to boast of itself in the same light as the Apostle’s through revelation.

To be clear the world has things to offer.  Though it is filled with darkness, there are pleasures to be had.  Hebrews tell us that Moses chose to suffer than to enjoy the pleasures of sin for a season.  On the surface the things of the world can even come close to the things of the church:  family, fellowship, friendships, etc.  When we read the words of Jesus in John 14:27, it is clear that Jesus knew what the world had to offer.  He didn’t say that the world offers nothing.  Jesus said, “I give not as the world gives” meaning that substance can be obtained.  The world gives security in money and finances.  The world can offer a form of peace and tranquility.  The replicas are wide and varied.  Only Jesus said that His peace was not like the world’s version.  His peace calms storms and makes raging waters tranquil.  His peace lifts us over confusion.  It is the peace that surpasses all understanding.  His security is not wrapped up in temporal things that rust or fade.  This is Lord’s Day and He has come to offer you peace and there is no parallel. 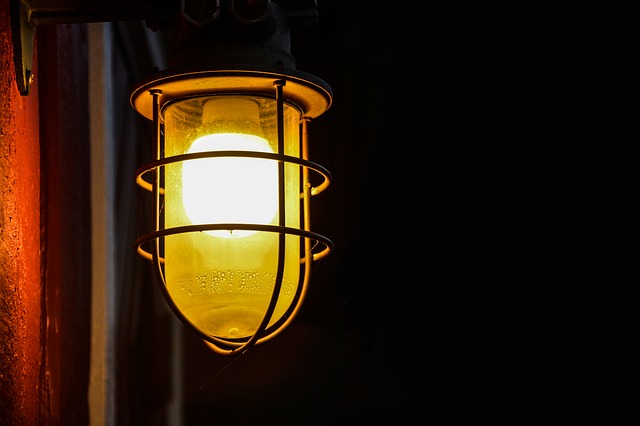