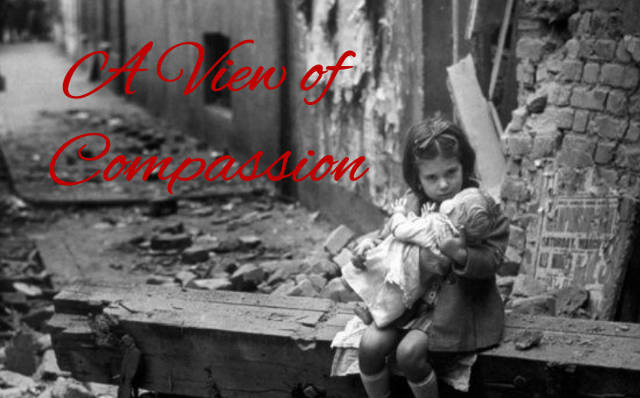 Cast in the frame was a picture of a little girl sitting on the edge of a sidewalk holding her favorite doll.  Her black hair ruffled against the light red coat she wore.  A small scarf dangled from the end of her sleeve as she sat with narrowed eyes and an indiscriminate smile.  I would have passed by the photo without a thought until I saw the next frame. The photographer opened his lens to reveal the wider picture.  No longer did I see a single girl aimlessly sitting on the edge of some random sidewalk.  My mind no longer made the typical assumptions of family and home.  The picture’s broadening view showed a rubbled, war-torn city.  A bloodied soldier was walking by with a bandage wrapped around his neck.  The lifeless remains of the aftermath could be seen just beyond her right shoulder, under which the half-fallen building could not hide.  Her smile no longer looked like it had in the first frame.  I wondered if it was a smile at all.  The lens pointed toward bewilderment and abandonment.

Safety was no longer part of the picture and a winter war was more certain than her casual approach to a chilly spring.

Had I only seen the first photo there would have been no stirring in my heart.   Had the photographer simply narrowed his focus and left it as such, no one would have known the real story behind this isolated child, but he gave us more and it invoked the heart and not just the head.

One of my favorite verses in the Bible speaks of the nature of Jesus Christ.  Mark 6:34  And Jesus, when he came out, saw much people, and was moved with compassion toward them, because they were as sheep not having a shepherd: and he began to teach them many things.

The fallacy of mankind is our judgement based upon our narrow view.  We often see so little of the picture that it makes us bypass the real story, but lives aren’t always captured in a small frame.  The casting of an entire life with all it’s entanglements, fears, losses, and pains cannot be seen in the smaller scene.  We tend to look minimally when seeing other people which keeps the mind appeased, but the heart cold.

It was the Lord’s sight and the actuality of their lives which moved Him.  He responded because He saw them through a wider lens. Jesus ministered, not based upon a passing glance or a whimsical view, but through the knowledge of their reality – they were sheep without a shepherd.  In consideration of His people who often failed Him, the psalmist wrote:  Psalm 78:38-39  But he,  being full of compassion, forgave their iniquity, and destroyed them not: yea, many a time turned he his anger away, and did not stir up all his wrath. For he remembered that they were but flesh; a wind that passeth away, and cometh not again.  God saw us in the wider frame of our true self and it provoked His mercy.

I am convinced that God loves us because of His complete view.   What I’m concerned about is the way we see one another.  Our struggle is not spiritual.  It’s a physical, natural, and common issue. We must look broader, wider; more intently to see the wider view of the lives of people.  People need our compassion which only comes with what Paul Harvey once called, The Rest of the Story. The lost need to be found; the saints need to feel wanted; the prodigal needs to feel welcomed back home.  It all comes with our view.  It is the look of compassion that comes from our look of love.

Jesus prepared a young group of disciples for the Gospel mission. They were to be His voice; His hands; His feet. He spent 3 1/2 years preparing them to face the world; demonic forces; and the religious sects. And among His many lessons He said, “it is impossible, but that offenses will come!”  Jesus said that no one will bypass being offended.  No one has ever worked in the Kingdom and not been offended. Peter wrote:  1 Peter 4:12  “Beloved, think it not strange concerning the fiery trial which is to try you, as though some strange thing happened unto you:”  There will be issues regardless of where you are in life.  An offense is not strange or rare.  They are common. They come to every person in every place.

My concern is not if you are offended in life. We have all felt that sting from  inside and outside the church.  Some will say something off-color or insulting.  My concern is our response to what has been done or said.  I rise to say that it’s time for the Body of Christ to realize that wounds are common to the Walk.   No one will avoid rejection, neglect, gossip, or hurt. 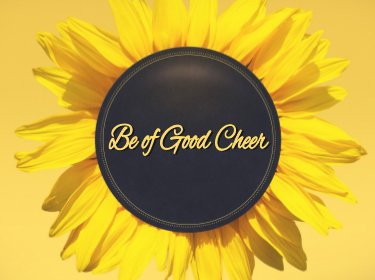 Jesus was wounded, bruised, despised, rejected, alone, abandoned by His men, scorned and mocked.  Paul said, 1 Corinthians 10:13  “There hath no temptation taken you, but such as is common to man…”  The word “temptation” here comes from the Greek word that means adversity.  The word adversity is synonymous with distress, crisis, and trial.  So before we believe that offenses are enough to cancel our commitment, let it be known that offenses are part and parcel of this life.  Jesus said that in this life we will have issues to face, but then He said, “be of good cheer, I have overcome them” meaning, “you can too.”

Jeremiah prophesied (Jeremiah 48:11) about the destruction of Moab.  He said the people had “settled on their lees” and had not been emptied out.  He was referring to the process of making wine which in those days demanded the continual pouring from one container to another in order maintain the flavor.  By not being poured from flask to flask, the wine becomes stagnate and loses its own constitution.  The prophet said that there was no stirring among the people and it caused them to become complacent in their approach to both God and the enemy.  He said that God had rejected them and the enemy would prevail against them.

Zephaniah stood to speak the similar words to the children of Israel.  They too had grown stagnate and lethargic before the Lord.  The prophet wrote Zephaniah 1:12  And it shall come to pass at that time, that I will search Jerusalem with candles, and punish the men that are settled on their lees: that say in their heart, The LORD will not do good, neither will he do evil.  They believed God was apathetic to their lives; that He did not care what they did or did not do.  In reality the Lord was looking for a people centered on Him and His Law.   David knew this to be true when he wrote: Psalm 139:1 O LORD, thou hast searched me, and known me.  God always searches His people with the candle of truth.

Today, the Lord is seeking for a people who refuse to be settled:  He wants us to be sharing the Gospel and living a separated life.  We must never reach a point in which we decide that our growth in God is over.  Nor should we believe the lie that God is apathetic to the way we live.  He is looking for a Bride and a People called by His name: Jesus!  We must be stirred and poured out from vessel to vessel.  This is the Word of God for our lives and it will lead us into this great Holy Ghost revival! 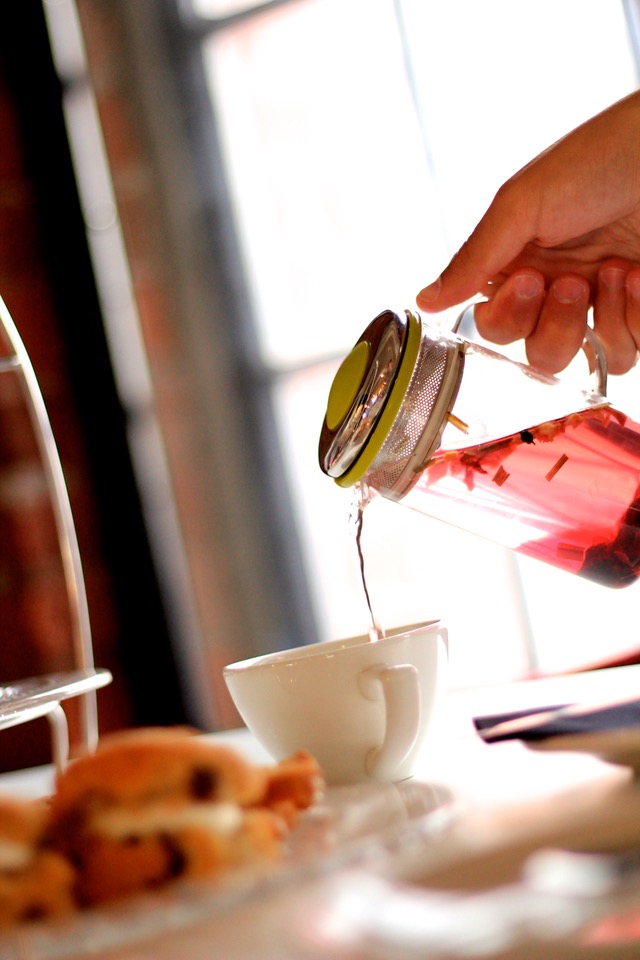 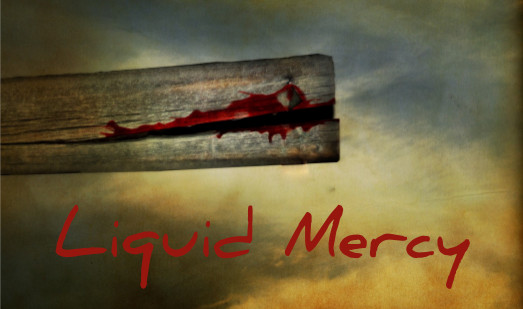 It was said of a reckless son that he had dodged tragedy on multiple occasions; that he was “living on borrowed time.”  The cliché’ came to mind when I read of the Power of God’s Mercy regarding the Children of Israel. How many times they failed and God recovered them is beyond the telling.  If truth be told, we all are living on Mercy’s Time. Of course not everyone embraces this truth. The religious, self-righteous, pious people who believe themselves above failure; they trust in themselves more than God’s covering. If a man thinks he stands, Take Heed… he will fall. Regardless of our length or tenure in the church, the saint is only made so by the Blood of Calvary.

The Blood is simply the liquid form of the Mercy of God.

We are all living under the umbrella of the Power of God’s Mercy.  The poet wrote it like this:  Lamentations 3:22  It is of the LORD’S mercies that we are not consumed, because his compassions fail not.  The Mercy of the Lord is holding back immediate judgement against us. Our minds cannot fathom how often God’s mercy has saved us.  The Word says we should be consumed, but God is faithful and His compassions will not fail.

Hear the psalmist: Psalms 78:38  But (God), being full of compassion, forgave their iniquity, and destroyed them not: yea, many a time turned he his anger away, and did not stir up all his wrath. Psalms 78:39  For he remembered that they were but flesh; a wind that passeth away, and cometh not again.