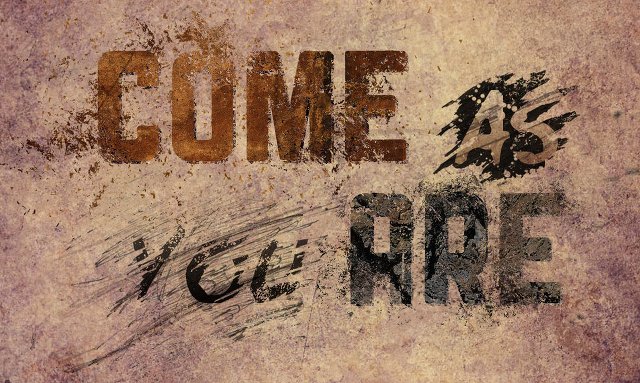 A recent church sign read, “Come as you are.”  Without being antagonistic, something struck me as inconsistent with the scripture.  When God called out to Moses in a burning bush, Moses could not come as he was, for God told him to take off his shoes, “for the place whereon thou standest is holy ground.” God would not allow the priests to enter the holy place in their normal apparel, nor did He condone the children of Israel acting as the heathen nations.  David wrote, Psalm 4:3  “But know that the LORD hath set apart him that is godly for himself” which meant that God desired a change of mind and actions of those whom He had called.

To be fair, “Come as you are” can be taken as an invitation to simply come to worship without the pressure of being perfect.  Of this I am in favor.  There are no prerequisites to come to God. People need to know that they can come to the service and seek God regardless of their appearance or background.

Yet in these later times “Come as you are” actually means, “you don’t have to change anything about yourself to serve God.”  This is not congruent with the holy writ as Paul said that we would become a new creature; that old things would pass away and a new life would begin.  That was the whole point of conversion.  Even Jesus said, “When thou art converted, strengthen the brethren.”

Changing from an old nature into the image of Jesus Christ was the purpose of the New Birth experience. Christianity was never meant to imply “come as you are” without the idea that God would require steps of transformation.  He wants us to come, but His desire is for us to change into the image of His Son, Romans 8:29.  So when we come to Him, we must know that the place where we stand is Holy Ground and it might require us to “take off our shoes.”